As a shovel is made for digging, a knife for cutting, and a hammer for striking, so you and I are made for creating.

The Bible is extremely clear on this subject right from page one. After each act of creation—light, night and day, land and sea, fish, birds and animals—God checked his work and pronounced it good.

But when He created human beings in His own image—as micro-copies of Himself—He did NOT say it was good. No. Instead, He looked at the final result of creation and said it was VERY good!

God spoke the universe into existence, and commanded vegetation to grow, but when He created the animals, He formed them from the ground. He did the same to create Adam, the first human being, but then went one step further—He “breathed into his nostrils the breath of life, and the man became a living being.”

Adam was kissed into life by the Creator God Himself.

Then God set Adam to work. His first task was a creative one, to name all the animals. He brought each animal to Adam to see what he would name them, and whatever name Adam came up with, that was its name. God didn’t interfere or correct, He trusted Adam’s creativity to come up with a suitable name. And he did.

God made human beings with the capacity to imagine—to picture in our mind, to visualize something our imagination. We see the finished product with the eye of our mind. Our imagination is God-given, it is one of the things that sets us apart from animals.

When our first grandchildren, twin boys, were about two years old, they loved to “fix” things. From their favorite kitchen drawer they would equip themselves with “tools” such as mixer beaters, a metal spatula, an egg beater, etc., and crawl under the dining room table to tap and rattle their tools on the bolts and metal slides. In their imagination they were repairing cars, trucks, rockets, and who knows what?

Creativity, unfortunately, is trained out of us by our culture. It is not welcomed in most schools, the military or in factories. Naturally creative children are taught to color between the lines, creative men to march in lockstep, and to do the same thing over and over. There is no room for exercising creativity—thinking of other, better ways to do things. That’s why, when you ask a roomful of adults how many of them are creative, few people will put up their hands. 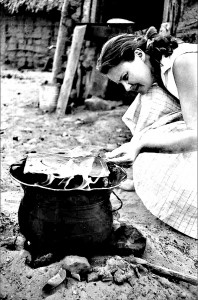 However, when we need to solve problems we have not encountered before, our creativity has a chance to emerge. During our decades in Brazil, for instance, Jo creatively adapted recipes substituting Canadian ingredients with whatever was available in the Canela village. Yes, she used crackers, lemon juice, and cinnamon to make a pie that tasted very much like a good apple pie.

As it did in God’s mind, all creation starts in our imagination. He imagined light, expressed it in words, and it sprang into being. So it is with us. We imagine an improvement to our home, a story to write, or a solution to a social problem. We express it, talk about it with others, put it on the calendar to be done, and begin to work to create a reality.

God expects us to serve Him, not by blindly obeying a set of rules—a list of do’s and don’ts—but rather by using our minds and hearts, our experience and skills, and our relationships and resources to do His work. No, most of us don’t need to name more animals, but there are problems galore to solve in this sin cursed world.

We are to love our Creator God with all our heart, soul, strength, and mind, and love our neighbor as ourselves.

May our Creator God guide us as we commit to using our creative imagination to love God by meeting the needs of others in this needy world, from the homeless man around the corner to Bible-less people groups around the world.