“It ain’t what you don’t know that gets you into trouble. It’s what you know for sure that just ain’t so.”

I wish we had taken Mark Twain’s philosophy to heart way back at the beginning of our Bible translation and linguistic research work in Brazil. If we hadn’t been so sure, we would not have made such a big mistake. Here’s the story:

The Discovery
In the first year of studying Canela, back in 1968, we made the interesting discovery that Canela verbs seemed to have two past tenses—one to indicate the recent past, the other the distant, long ago past.

Here is an example showing the differences in CAPS:

The immediate past always seemed to use the longer form of the verb, curaN instead of cura as well as a little word TE preceded by a 1st, 2nd, or 3rd-person prefix.
All the legends and myths of long ago started off with PE and the shorter form of the verb, cura.
It was a very clear, easy-to-see distinction. It had to be easy, of course, since we would never have discovered it so soon in our research if it had been difficult.

During the next few years, we wrote and published some learn-to‑ read booklets and printed well-known legends for the Canelas to practice reading. We even published a beautiful 150-page illustrated Life of Christ book. Naturally, since Jesus lived long ago, we used the distant past time marker, PE and the shorter form of the verbs.

The Problem
There was only one thing that bothered us. Once in awhile the Canelas told us stories about things that happened in the distant past. And there – right in the middle of all the distant past PEs – would be a string of regular past TEs. But, we had other, more confusing aspects of the Canela language to study, so, thinking that maybe the storyteller had slipped and made a mistake, we decided to concentrate on these more complicated aspects and leave the PE-TE problem for some other time. Bad decision!

Several years later we participated in a linguistic workshop taught, as usual, by a Ph.D. linguist. “What aspect of the Canela language are you going to study?” he asked. “Well,” I replied, “We should probably get this little PE-TE problem cleared up before we go on to more important things.” 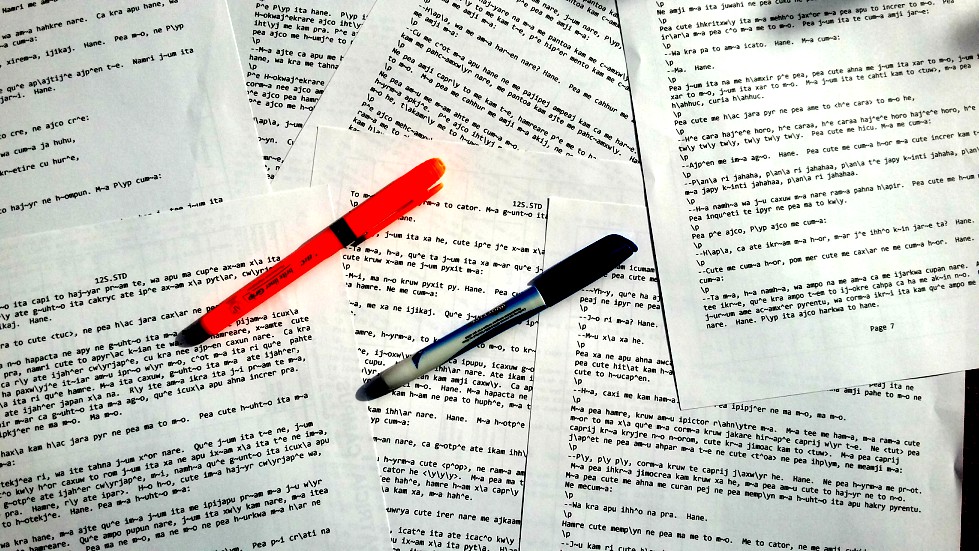 The Research
He agreed, gave us some instructions, and we equipped ourselves with some highly sophisticated linguistic tools – two highlighter pens, one orange and one blue. We then coloured our way through a huge stack of distant-past stories. All the distant-past PEs and short verbs we circled orange and all the inexplicable TEs and long verbs we circled in blue. By the end of the day, we realized the problem was not rare at all. Every single one of the stories started off in orange, turned blue towards the middle and then went back to The Solutionorange at the very end.

So, we sat down with our linguistic consultant and asked the important linguistic question; “Why do these orange stories turn blue?” After many days of pondering, praying, and testing, we got the beginning of an answer.

The Solution
It turned out that in stories set in the distant past, the orange parts, the ones with PEs and short verbs, tended to be descriptions, settings, bits of explanation, background information, and summary, etc. The blue parts, those with the TEs and long verbs were the important story-lines, the main actions, and the climax.

What an eye-opener! We were very glad for the break-through, but were sad to realize that our beautiful Bible-story book was orange from cover to cover. All background, all settings, all description, all supporting explanation. No main actions, no vitally important things happening. No climax, not even in the story of our Lord’s resurrection!

The Prevention
Linguist-Bible translators don’t need to make these types of mistakes anymore. In the past forty-five years, vast amounts of linguistic research have been gathered and are now taught at places such as the Canada Institute of Linguistics (CanIL). A summer training session will be held in Trinity Western University. Check it out here https://www.canil.ca/summer/