Bible translator’s job: Translate the Bible so God can introduce Himself to people.

God’s job: Prepare the people to accept the introducers.

Forty-three years ago, in the spring of 1968, the Canelas took the second step in accepting us as part of their indigenous society. My wife and I went through the Canela adoption/initiation ceremony that made us members of their families and citizens of Canela society. It involved lots of red ochre paint, plenty of tree-sap glue and white hawk down all over our bodies. Surrounded by crowds of Canelas, we listened to the chief’s long speech; then each of the sub-chiefs and elders made shorter speeches.

We couldn’t understand a word.

I had taken the first step a month earlier when I first met the chief in town. Although he knew only a little Portuguese, he understood that we wanted to live in the village, learn Canela, and help where we could. He pantomimed giving me an injection in my upper arm, and made writing motions. “Yes,” I said, “we will treat sick people and teach you to read and write.”

A few days later, I stood in the centre of the Canela village plaza surrounded by a large group of sombre, silent, serious looking Canela men. I faced a village elder who, leaning on his spear, chanted loudly for long time.

I couldn’t understand a word.

Abruptly he stopped chanting, and shouted loudly, “Prejaka! Prejaka! Prejakaaaa!” at which all those silent men behind me suddenly shouted, “Yuhaaa!”

Then they all broke into smiles, grabbed my hands and kept saying “Prejaka, Prejaka, Prejaka.” It finally got it! I had just been given a Canela name—the first step into being accepted into Canela culture.

Jo and I experienced only one naming ceremony, but over the next few decades, we went through the adoption/re-initiation ceremony dozens of times—each time we returned to the village after an extended time away. And eventually we fully understood all those speeches.

“We have adopted you into our village and into our families. You are even more one of us now than when you first came to us. You now speak our language. You invented a way to write our language and taught us to read and write it and count and read numbers. You are training teachers. You make books for us. You help us with medicine. You are family and belong here. Join any festival. Go anywhere in Canela lands. Take pictures of any of us, and of any of our festivals. When outsiders come in just to look at us and our ceremonies and take pictures, we ask them for gifts, but we will never ask you.”

A few years ago, after an absence of nineteen years, (forty-one years after the original invitation), we re-visited the village. Yes, once again, glue, feathers, red paint and a wide-open village welcome to our whole family—fifteen of us—including our eight grandchildren. 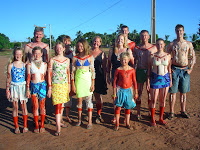 God arrived in the Canela village before we came to prepare them so they would adopt us and accept us as citizens. He stayed after we left to adopt many Canelas into His Family and accept them as citizens of His Kingdom.