A true Christmas story from the first volume of my upcoming auto-biography–written to be read to children. Yes, my name was Hansje. This happened in 1944 during the Nazi occupation of Holland.

The December that Hansje was six years old was not a fun time. First, it was much colder than usual. And the bad soldiers often shut off the electricity and the gas. So the heaters were off most of the time, even the burners on the kitchen stove weren’t working very often. Everyone had to wear their coats all the time, even in the house, sometimes even in bed.

But not only was it cold, there was also very little food to eat. Many days the stores had no bread, no milk, no meat, no food of any kind. The bad soldiers just kept taking food right from the farms, and ate it themselves, or sent it away to their own country. There was never enough left for the people in the country where Hansje lived.

Once in a while, when there was some food in the stores, people were allowed to buy just one or two things so that everyone would have a little before the food was all gone again. Even rich people couldn’t buy all the food they wanted because that would mean other people would have nothing. Yes, during the time those bad soldiers were in Hansje’s country, things were very, very bad.

One day, Hansje’s Papa said, “I have a surprise! I bought some cheese, some special cheese called Slide Cheese. We will eat it for our Christmas feast.”

Hansje thought he maybe remembered tasting cheese once long ago, and liking it very much. He didn’t know what a Christmas feast was, but it sounded so exciting he could hardly wait for Christmas. 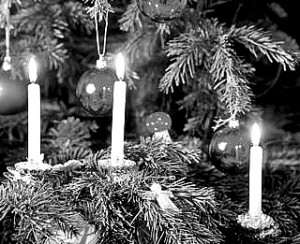 On Christmas Eve Papa closed the curtains and lit the candles on the tiny Christmas tree. Hansje sat close to the coal heater with his parents. Mama was holding his baby brother Wobbie in her lap, and his little sister Jannie sat on Papa’s lap. They sang Christmas carols while Wobbie and Jannie stared wide-eyed at the flickering candles. Hansje liked the carols, but he kept thinking about what was going to happen next.

After the carol singing Mama put the little ones to bed. Finally, it was time for the long-awaited Slide cheese feast. Mama laid three small buns on top of the coal heater. While they were warming up, Papa read the Christmas story from the Children’s Bible. Hansje had heard the Christmas story before, and it was good, but smelling the toasting buns was even better.

When the buns were toasty and warm, Mama slit each one into two slices and put them on a plate on the side table. Then Papa reached into his jacket pocket and pulled out a small, flat package and laid it on the plate, too.

Hansje could hardly wait, but first Papa prayed and thanked God for the food and asked Him to bless the special Christmas feast.

Then he took the flat package, opened it carefully, and there on his hand lay a piece of Slide Cheese, just the right size to cover a slice of bun. He laid it carefully on one half of a toasty warm bun and said,

“Now watch closely so you’ll know how to eat this special Slide Cheese.”

He held the bread and cheese to his nose and sniffed it. Hansje’s mouth watered just watching him. Then Papa slowly and carefully put it into his mouth.

But, just as the bun was passing his lips, his front teeth caught the edge of the cheese and slid it back. Then he took a bite, not of the cheese, just the toasted bun. He chewed it with his eyes closed, obviously enjoying it a lot.

Next it was Mama’s turn. She did the same thing, sliding the cheese back and eating only a bit of bun. At last it was Hansje’s turn. Both Mama and Papa watched closely to make sure he did everything right. He sniffed the cheese, and its wonderful cheese smell reminded him of the last time he tasted cheese long ago. He slid the cheese back with his teeth, bit off a piece of bun, and chewed and tasted it for a long time with his eyes closed.

Then it was Papa’s turn again. When they finally finished those six slices of bun, the candles had almost burned out and at the end they still had the whole piece of Slide Cheese.

“Tomorrow is Christmas Day,” Papa said, “and we will do this again. But then, when only three slices of bun are left, do you know what we will do?”

And that is what they did at their special Christmas feast.

It was the best Christmas feast Hansje had ever eaten!