Summer Blogging Break
With this thought provoking post I am taking a summer break in my weekly blog. Jo and I are going to Mexico for three weeks in July with nearly our whole family to celebrate our belated 50th wedding anniversary. During August we hope to relax, read, study and prepare for fall ministries. Here’s wishing you all a great summer. See you again the first week of September!

Whatever Happened to All Those Pentecost Converts?
One moment 120 Christians were quietly praying together and the next moment the hall was filled with a howling hurricane. Then they saw what looked like flames of fire on each person. They ran out and started telling what God had done. The crowds were utterly bewildered to hear them speaking in their own languages even though they came from a dozen different parts of the world. Peter then preached a sermon which resulted in 3,000 converts.

Acts chapter 2 lists the countries represented by these new believers. Here they are in with today’s names: Arabian peninsula, Crete, Egypt, Ethiopia, Gaza, Greece, Iran, Iraq, Italy, Jordan, Lebanon, Libya, Palestine, Sudan, Syria, and Turkey. These converts went home and became missionaries to their own people, spreading the Good News for nearly 2,000 kilometres in every direction from Jerusalem.

Overlooked by Church Historians
Christianity is obviously strongly rooted, not just in Palestine, but in the whole Middle Eastern region. It shouldn’t surprise us therefore, that there are many solid, Bible reading, Bible believing Christians in north-east Africa and south-west Asia. And they are not all the product of modern mission efforts in the past century. The Church in the Middle East has been a faithful witness to Christ for the past two-thousand years.

The reason that this is a surprise to many Christians is well-stated by Paul-GordonChandler in his book, God’s Global Mosaic. “In Western theological colleges the study of church history begins in Jerusalem and proceeds quickly westward with the apostle Paul. Then there is a jump from the early church fathers to the medieval Roman Catholic Church and the Protestant Reformation. Consequently, a student can be left with the impression that the church somehow ceased to exist in the lands of its origin.”

Strong Through Suffering
Although little is taught about the Church in the Middle East, they were strong churches, enduring enormous persecution. First under the Roman Empire, then under the Byzantine, or Eastern Roman Empire, Christians were harassed and martyred for centuries.

With the spread of Islam came more widespread oppression and killing that continues even today. The first time the word genocide was used to describe the systematic killing of an entire people group was 100 years ago when the Muslim Ottoman empire massacred the Christians in Armenia.

The Christians in northern Iraq were persecuted so much they were forced to migrate every couple of generations, much like European Anabaptist groups such as the Mennonites, Hutterites, and Amish centuries later.

“Killing Christians Pleases God”
God has been faithful, the Church in the Middle East has endured, and the twelve million Christians currently living in these nations continue to carry out powerful ministries under some of the most repressive regimes on earth.

What sobers me is that these millions of Middle Eastern brothers and sisters in the faith have a heritage of suffering few of us can look back on. These believers have endured for generations and continue to persevere in their faith even though most are treated as second class citizens and some of them live among people who sincerely believe that killing Christians pleases God.

What about Us?
In comparison, we western Christians, especially in English speaking nations, have had it relatively easy for many generations, living in countries where the laws are based on biblical principles. But as secular humanism grows stronger, laws are changing, and Christian principles are being pushed aside.

I wonder if we will soon see the day when churches are taxed, first on their property, and then on their income. And what if laws are repealed that currently allow churches and para-church ministries like Wycliffe to provide donors with tax-deductible receipts? And what if Christian schools were closed, home schooling banned, and all children forced to attend public schools? 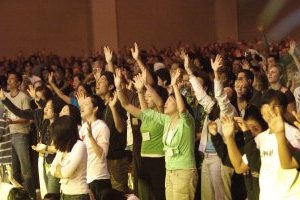 And what if these rather mild acts of discrimination provoked, not a howling hurricane of protest, but a great spirit of unity among Christians, leading to an outpouring of the Holy Spirit?

What if, instead of uniting to protest, we united to praise God and pray for strength to endure increasing persecution?

Would we grow strong in faith like our suffering brothers and sisters in the Middle East who live by the words of Jesus, “In this world you will have trouble. But take heart! I have overcome the world?” John 16:33 (NIV).