The Beginning
The last job I had before attending Bible School in Calgary was with a seismic oil exploration crew based out of Three Hills, AB in the summer of 1957. I had told the crew I was a Christian. They noticed that I went to church on Sundays, my language was clean, and I didn’t smoke, drink or mess around with girls.

One weekend the boss gave us extra days off. My foreman, his girlfriend and another guy from the crew were driving his car to Edmonton. I asked him, “Can I ride with you as far as my folks’ house in Red Deer?”

“No problem,” my foreman said, “but be ready for us to pick you up at your house on Sunday. I’ll phone you to let you know what time we’ll come by.”

The Middle
That Sunday afternoon he called, “We’ll be at your house tonight at nine o’clock. Be ready.”

“I will be at church at that time,” I said. “Please pick me up there. The church is only one block off your route, right near the highway. You won’t even need to go all the way up the hill to my house.”

“Well, okay,” he said, but I sensed resentment in his voice.

I didn’t say anything while he continued cursing “useless church people”. Eventually he turned his attention back to his girl.

Twenty minutes later, as we were driving down the two-lane highway at 100 kilometres an hour, the car ahead of us abruptly slowed down. Our driver slammed on the brakes, and to my horror, our car swerved to the left and slid sideways into oncoming traffic. The last thing I remember was seeing a pair of headlights only yards away through my side window.

When I woke up, my left wrist, knee, and head hurt. People ran up to help. I crawled out the driver’s door. A man helped me stumble to a nearby house where I sat on a couch to recover. A policeman came in, and after talking to the driver, asked, “Who was the front seat passenger?” I raised my hand. “You’re a lucky guy. If that car had hit your door, you would not have survived. Instead, it hit forward near the hinge door frame, which absorbed the impact.” 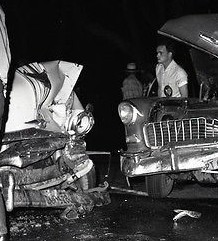 The Ending
The foreman’s car was a total wreck; he cursed and worried aloud about how we were going to get to Three Hills still eighty kilometres away. “I’ll phone my Dad.” I said, “He’ll come, pick us up, and take us to Three Hills.” I did, and Dad did, arriving a half an hour later.

At the end of the trip, Dad refused the money the foreman wanted to give him, saying, “Jack and I love Jesus, and we love helping people in trouble.” With that, he turned the car and drove home, completing a 225-km-long demonstration of Christian love. Five hours later he got up to go to work.

The cast I wore on my left wrist reminded my foreman for the next two weeks that “church people” might possibly have some use after all. Only God knows what impact, if any, this experience had on him. We all know, however, that Dad will hear Jesus saying, “I was stranded in a wrecked car and you drove me home.”

(This is an excerpt from Chapter 20 of my next volume of memoirs, The Adventures Begin.)